The last couple of weeks have been serious, what-does-it-all-mean affairs.
This is dangerous territory for a blog with only four posts.

So there I was, standing in the kitchen in nothing but a pair of underwear, with a yellow rubber glove on one hand, oven mitts over both, pouring 3 gallons of very hot water into a cooler. I was attempting to get one more test batch of saison going before I settled on a recipe and brewed my entry for Brooklyn Wort. And, at least in that regard, I was successful. But any semblance of modesty–even by low homebrewery standards–had flown out the window. And let’s not even address the fact that I created this scene on the Lord’s day.

But let’s step back and take things in order.

Saturday dawned bright. Maggie was up early, working on a couple of big orders that she wanted to ship out early next week, so I took Charlotte out with me in the morning to run an errand. We only needed to drop the laundry off,1 although I hinted to her that I might consider stopping at “the toys” (the playground) on the way back. I shouldn’t have mentioned it. Charlotte wailed when we walked past the playground on the way to the laundromat and it was only after I promised that we would stop on the way back that she calmed down. I probably failed some kind of parenting test right then.

There are a few playground options in our neighborhood. The one Charlotte loves is the one with the toys and is by far the newest and the nicest. There is one closer to us that is older and less cared for but it’s not fenced in, so some not-so-savory types sometimes hang out there. There are basketball courts next to it, which means there are usually lots of older kids around.

At this new playground, it’s all fences and fountains. Lots of parents have left old toys there for everyone to use,2 which seems pretty cool but leads to some rather adult conflicts. The kids latch on to the toys. They guard them, when they’re not monopolizing time on them. They steal other kids’ toys. Kids that young don’t really understand the concept of sharing, but they do get upset when something is taken from them. Trying to explain other kids’ weird toy possessiveness to Charlotte gets old fast and, as a result, I kind of hate going to that playground.

Charlotte didn’t have a great time at the playground Saturday. She got the little stroller that she likes, but she was ready for a nap, so for 30 minutes she pushed this stroller around the playground in a slow, drowsy haze. She didn’t interact with the other kids, except to point when they had a toy she wanted. It made me wish we were at the park, where the focus is more on socializing and not on things.

That brings us back to Sunday’s session at the Never Nude Brewery, which was thankfully short on socialization. A hot night, a strong cup of coffee, and a desire to “get a good jump” on brewing this latest batch led me to neglect the essentials: showering, dental hygiene, clothing. This isn’t the first time something like this has happened. Sometimes I forget to wash my hair in the morning and just head off to work. It’s actually a good sign, I think: it usually happens because I’m excited about something and want to get to work. So, gross as it is, I’m not sure it’s a bad thing.

After I brewed, and after Maggie finished packaging up one of her large orders, Charlotte asked to take the baseball and the “big ball” (it’s blue and looks like “earth,” if you ask C) to the park, and we were more than happy to get out of the hot apartment.

Charlotte’s command of language is growing beyond one-word descriptions of what she sees. She’s starting to put words together and direct the action, which should come as no surprise to anyone who knows her mother. So, at the park, Maggie and I made sure to throw the big ball up. I scooped Charlotte up and we would run to Maggie so she could throw, after which we would do more. It was a blast.

I’ve been fooling around with the feature on my phone that turns it into an audio recorder. Basically, I just turn it on and set it down to hear what it picks up.

One thing my generation has that my parents’ generation didn’t is the opportunity to record anything, in basically any format, in high enough fidelity so as to be very close to representative. Of course, not everything can be recorded, but most of it can and at very low cost. And so we do—we have 100 GB of digital photos to prove it, if you don’t believe me. Whether all of these records will ever amount to any substantial meaning in the long run is anyone’s guess. My hunch is that they won’t. I worry that we’ll be crushed under the sheer weight of the things we’ve recorded, that all these thousands of photos may have the same effect as the photo snapped from atop the tour bus—it proves we were there, but offers few clues about why we thought to record it in the first place.

I’m hopeful that these little snippets of audio are different. It’s a limited format, of course: you only get sound. But memory and imagination fill the space left by the lack of visuals. As I sat at work this afternoon listening to the handful of recordings I had copied off my phone, I found them incredibly vivid. I have no way of knowing right now, but if I had to guess, this off the cuff, completely mundane audio might prove to be some of the most evocative stuff from Charlotte’s first two years. 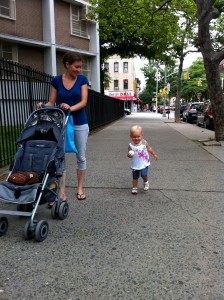 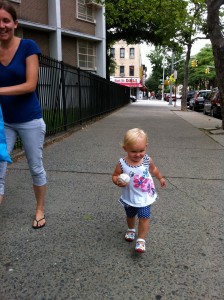 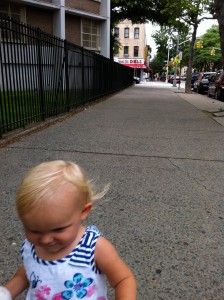 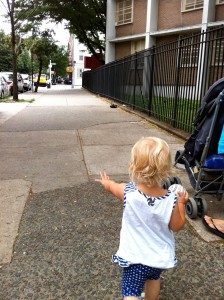 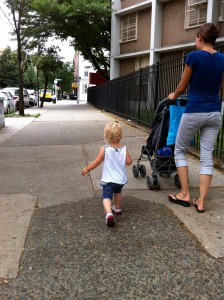 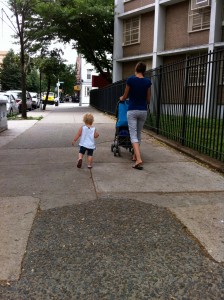 1 Yes, we pay to have our laundry done. I can’t think of a better real-life illustration of opportunity cost—I’ve probably gained weeks of my life back that would have been spent at Laundry City Laundromat.