I’m back at work, at least for the summer—I’m working on a full-time project at The Wall Street Journal in midtown.1 This morning, as I went through the mindless (but critical) socks-belt-shoes routine in our bedroom, I found myself studying Charlotte, who was still asleep. Her back was to me. She was facing the wall, curled up a little more than usual. The night had started warm and all she wore to bed was her pull-up, which has a red car on it that she loves. Taillights peeked out around a long little back which was curled toward me. There was a faint criss-cross of tan lines, a souvenir from a week of Iowa pools. X marks the spot.

1 Well, 9-to-6. And the novelty of my first job in midtown could be the subject of an entirely separate blog. Also, first job with built-in italics.

So, I have weekends again, full of the same thrilling highs and lows we remember from last summer. The exultation of the Friday evening commute! The grumpy Sunday night! The pressure in between to make the most of it, and then the unceremonious end: cramming into a soaking wet, overcrowded train on Monday morning. (Actually, that was one thing I never had to worry about on the G train, unless something unsavory had happened in the adjacent car.) 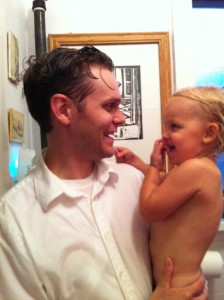 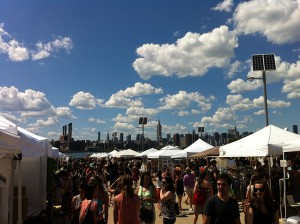 Saturday, we went up to Williamsburg for the Renegade Craft Fair, which was being held on a hot little patch of concrete off of Kent Avenue that passes for a state park. We met up with Jenny, ended up spending way more time at the neighboring Smorgasburg, and toured her new place, which Charlotte also loved (there were dog toys).

I reprised my trip to Governor’s Island on Sunday, after talking it up to the girls. We arrived just in time for an event called Punk Island, in which punk bands were invited to set up seemingly anywhere on this curious island and serenade the visitors. World War Nine has “lots of new shit coming out,” if you were wondering. The din was actually fine, just one more incongruous element on an island full of incongruities: a fortress from the War of 1812 just a short walk from apocalyptic, burned out housing projects, itself just a short walk from Mark Di Suvero’s monumental sculptures at the aptly named “Picnic Point.”

Charlotte, of course, enjoyed the two-minute ferry ride the most, and it’s hard to argue with her: the breeze was cool and the view of downtown Manhattan triumphant as usual. 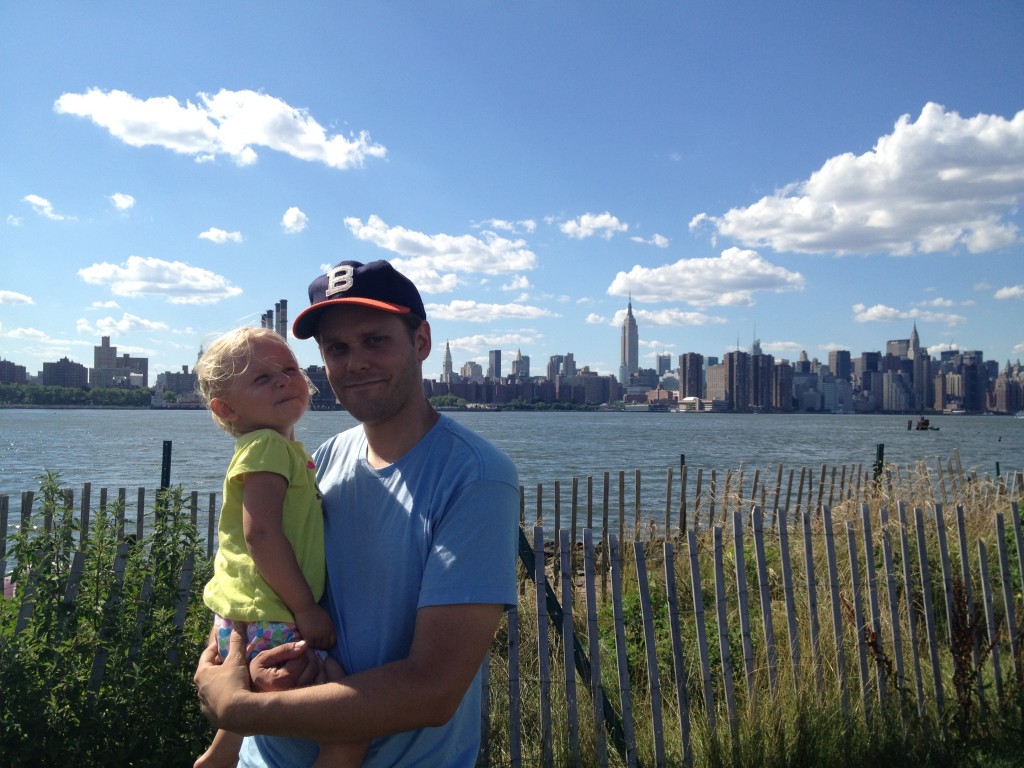 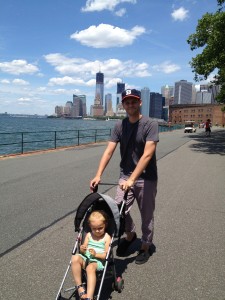 Even with the return of the weekend, I am finding it difficult to recapture the rhythm of last year. This summer has had a strange shape, molded by absence, fluidity, and self-reliance. I can’t help but compare it to last summer, when the turmoil was entirely internal but a regular, unchanging professional routine allowed me to explore some other outlets, this blog primary among them.

Charlotte doesn’t take a regular nap anymore, which means she sleeps later than your average bear. It’s not uncommon that I leave for work before she’s awake. If she does wake up, she has this little routine where she trots—there’s no other word for it—out from the bedroom, bleary-eyed, and heads straight for Maggie’s lap. She puts her head on Maggie’s shoulder and then wakes up, slowly and quietly.

I must have woken her up this morning, because she came out of the bedroom right behind me after I had finished my little observation. I switched the routine up on her, scooping her up before she had a chance to get to Maggie’s lap. I stood and held her in my arms, and she settled into my shoulder easily. For a moment, maybe 30 seconds, it was quiet and I rocked slowly with her, me standing with my bag, ready to go to my new job, her waking up in a new and unfamiliar way. I held her and remembered how it used to be, not that long ago.