On the hottest day of the year, Charlotte wilts

For those of you reading this who don’t have a child, watching a kid get sick is a bit of a thrill ride. It happens so quickly, usually with very little warning. Maybe she wakes up early, or cries over something really trivial, but we never get much more notice than that. Soon, she’s a furnace, as her body heats up to defend itself. As she shuts down, our worry ramps up.

Japanese honeybees have this incredible defense mechanism when a hornet tries to attack the hive. They can’t sting the hornet, the hornet is much too large and powerful. Instead, they swarm the hornet and use vibrations from their bodies and wings to heat the air around the invader. Hornets can withstand temperatures up to 115°, honeybees 118°. The collective wing-beating by the honeybees raises the air surrounding the hornet to 117°, killing the attacker without sacrificing the hive. The precision and the balance of this is fascinating to me, the margin of error so slim.

Every time Charlotte’s sick, we’re exposed for the novice parents we are, hovering over her, hyper-sensitive to her symptoms.
Friday night we watched her carefully as she lay still on the couch, working through the worst of her fever. Her eyes were glassy and unfocused. Wow, look at her neck, her pulse seems really fast. Maggie doesn’t say anything, but I hear the telltale click of her phone unlocking and I know she’s off to the internet to have her worst suspicions confirmed. 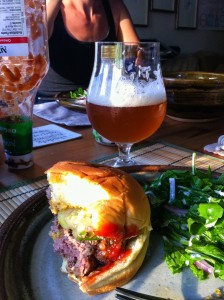 But as quickly as it comes on, it runs its course. 12 hours after skirting the edge of overheating, Charlotte hopped out of bed, ready for a day. She wasn’t totally over it, but she had broken her fever. By Sunday, she was running through the fountain at the park.

By way of contrast, Maggie hasn’t been herself for months. The root cause is an iron deficiency, but the effects are varied and numerous. Headaches, lethargy, and anxiety—none of which are fun on their own, and together are a pretty potent combo of awful. There’s no temperature to take and little to chart progress against. We’re cautiously optimistic that she’s turning a corner, with the help of meat, of all things. But iron deficiencies take months to sort out, and require a kind of rigorous, disciplined nutrition regimen that is foreign to both of us. The hardest part is having to keep the faith that what we’re doing will work, that we should keep doing the same thing even though there’s no immediate change for the better. The effects are slow to see and the deficiency takes months to reverse; it’s a real test of our patience.1

1 This is the hardest test you can give Maggie.

Me, I’m fine. I feel great. But this sweltering weekend was a reminder that even when things feel great, it’s all a very delicate balance. One degree, a few milligrams of iron, these are the margins.