I was leaning against the door on the subway the other night when it hit me. I’m officially a New Yorker.

The question of what it takes to become an “official New Yorker” is touchy. To discuss it is to open yourself up to questions of authenticity, identity and ownership. These three themes comprise the Brooklyn gentry’s dense, molten core of anxiety and help keep things moving up at the surface.

I came across a link to an odd New York Times Magazine piece from 1976 titled “101 Things to Love about New York City.” A listicle, 40 years ahead of its time! Many of the items on the list would make the same list in 2014:

Other parts of the list were a reflection of the uniquely seedy and dangerous place NYC used to be. Number 97, for example, “the rush of relief when you’re not mugged after you thought you would be.” (If you identified with that in 1976, you are an official New Yorker.)

Number 1 on the list was the best one, and still rings true: “being nostalgic about things in New York City that never were so great.” Now that feels right. Hating that something changed while recognizing that you hated it to begin with. That feels New York. Only an official New Yorker could pull that off.

That evening, I thought of this list when I had to get off an absolutely stifling D train well before my final stop. The train, packed as usual during rush hour, had the heat on full blast on a 75-degree day. This used to happen all the time, hot trains were a regular thing in 2006—if memory serves, that is. But, as I stood on the platform waiting for the next train, I couldn’t remember the last time I was on an overheated train.

Once on the B, I noticed the bubbling, water-damaged paint on the ceiling above the doors (I lean against the door, it’s the best spot on the train, sue me). After a rainstorm, it used to be common to step onto a B train and see a giant puddle of liquid on the floor and in the seat next to the door from rain that had sputtered out of the leaky ceiling when the train went around a bend. These discolored puddles, covered well by Louie, contained enough mystery to be avoided like the plague. Was it rain? Soda? Pee? Maybe! No one dared find out. As a result, a train packed asses to elbows would still make room, forming a tight radius around the puddle. We kept one eye on the sloshing puddle, just to be sure it didn’t spill over the makeshift seawall provided by the orange bucket seat. 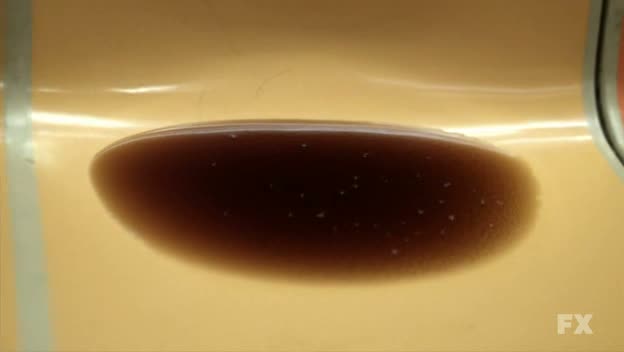 Relic of a bygone era.

There was no leak coming from the water-damaged ceiling of my B train, despite the day before being the 10th rainiest day in New York City history. In fact, I couldn’t remember the last time I saw a seat puddle. Was the seat puddle extinct, eradicated by a strange new customer-centered MTA forged in the fires of Bloombergian efficiency? Was I really wistful over seat puddles?

Indeed, the trains never were so great as they are now. But there I was, thinking fondly of the broken ones, the trains of the mid-aughts that would bake you and spray you. Nostalgic about the things I used to hate. I got off at 7th Avenue an official New Yorker, one of the newer models.

I’ve lived here eight years, moved once, and have never been mugged.

3 Responses to Never So Great