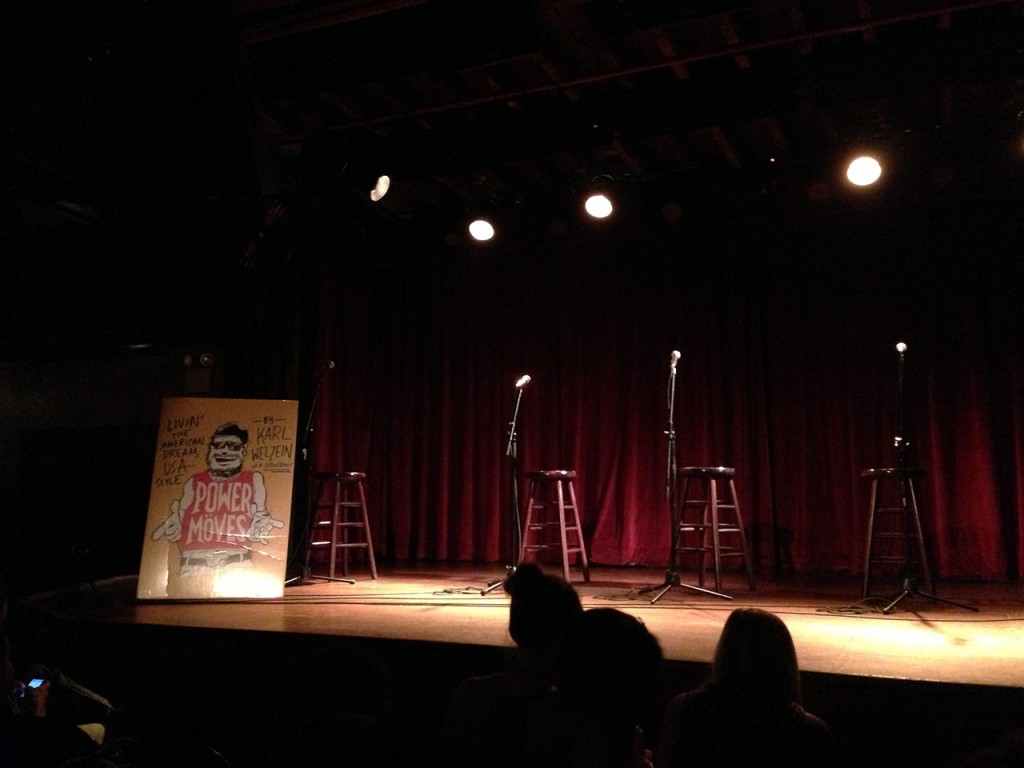 I met up with JP to go see a fictional Twitter character at the Bell House, as one does on Monday nights. It was basically a staged reading from Karl Welzein’s (@dadboner) corpus of tweets, with brief standup sets in between from local comedians. I was struck by something after the fact: we were all there to listen to a fictional character—this was theater. Awfully informal, but still, theater! I’ll repeat that, because I didn’t believe it either the first few times I told myself: 20-somethings came out on a Monday night to watch theater.

You can argue that it was more standup comedy than theater, but we were all there to listen to a highly developed character we’d only known from Twitter. Liars Theater fans, imagine if Stubby Digits got a book deal and did a low-budget tour. I’m not saying this Twitter-to-stage trajectory is a trend (though it would be fun to claim that Liars Theater was some kind of superlocal pre-Twitter for Marion, Iowa) but it seems at least notable that Twitter facilitated this kind of interest in a fictional character. I’ve certainly never seen anything like it.

Charlotte’s enrolled in (free!) swimming lessons provided by the city (socialism!), so the girls went up to the McCarren Park Pool to swim in the morning. While they did that, I sat literally two feet from the air conditioner and narrowed down my ideas for this app I have in mind. All three ideas are in the same ballpark: storytelling, preservation, portability, future accessibility, etc. I haven’t yet narrowed the field down to one.

That afternoon, we took the B into Manhattan to the Natural History Museum, something I’ve wanted to do on a weekday with Charlotte for a long time. She was really excited to show me the exhibit of live tropical frogs. For an exhibit that wasn’t much more than a bunch of frogs in aquariums, it was really fun. Super colorful, very exotic.

At one point we explained to Charlotte how cool it was that we get to go to the Natural History Museum whenever we want. We told her we never got to go there when we were kids, but I don’t think it really registered. Nor should it, I guess, it’s the sort of observation that only a wistful parent could make. It’s funny, a little part of me hopes that she never really appreciates how rare it is to have the kind of access to cultural opportunities she has access to, that she comes to expect this level of fun (in a humble, down-to-earth, Iowan kind of way, of course). 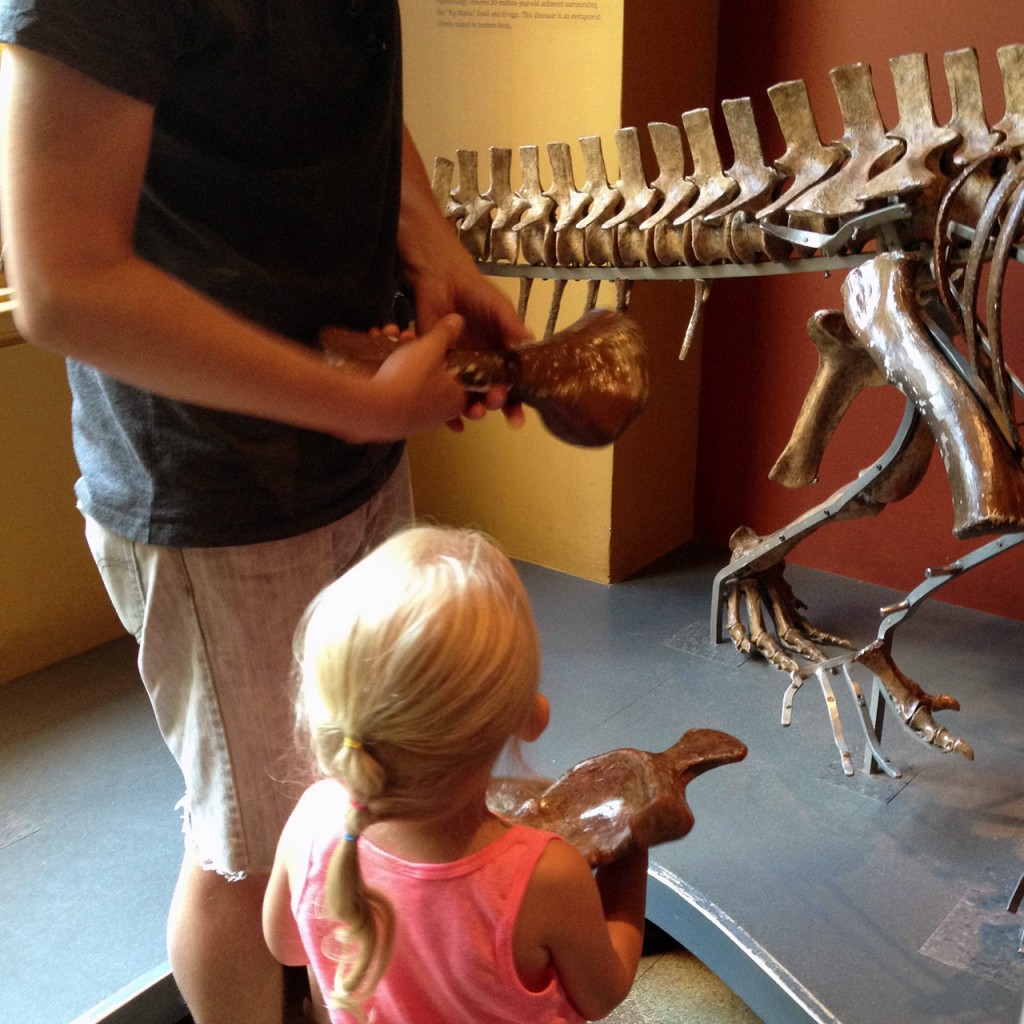 Maggie’s been fighting off some summer sickness, so this was the most uneventful day of the weekend. We stayed inside, mostly. We must have played memory games with Charlotte a dozen times, she’s completely nuts for memory games right now.

Weather: worst of the year

Maggie and C left in the morning for another swimming lesson and, after my run, I threw open the windows, fired up the burners on the stove, and proceeded to make it absolutely unbearable in the apartment. Hell-Upon-Hudson, I should have called it. 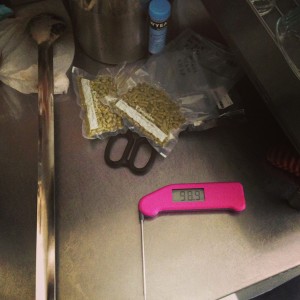 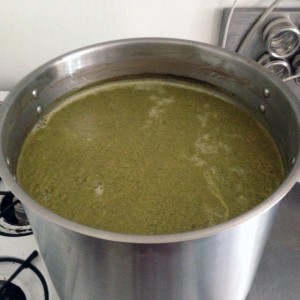 I brewed a “half” IPA based closely on The Mad Fermentationist’s no-sparge recipe. I’m hoping to capture huge hop flavor and aroma in a small, bright 4% beer.

After I finished brewing, we switched the A/C back on and evacuated. The afternoon had grown so unbearably hot that only institutional air conditioning would do. We made a beeline for the public library, where we got Charlotte set up with a passport. That hour at the mercy of the State Department was the closest I’ve come to just killing time in years and, I have to say, it was pretty nice. For her passport photo, Charlotte wore her fish shirt that, years ago, was a fish dress. There was a very young couple there holding their infant son up for a passport photo and I was reminded that passports are valid for ten years. This is Charlotte until she’s 13—she won’t look like this next week. 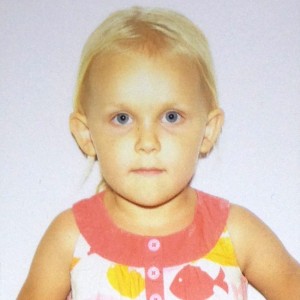 Weather: worst of the year, with 100% more humidity

More memory games. Good lord, the memory games. One new twist, Charlotte is starting to cheat: she tries to hide cards when it’s not her turn but she knows where a match is. She’ll casually lean out over all the cards and put her hand on the one she doesn’t want you to turn over. Her technique is terrible but powerfully cute and I have to admit I have a little respect for her competitiveness. Most of the time I let her get away with it; every so often I bust her just so she doesn’t get accustomed to a Wall Street way of life.

I’m through taking MTA buses anywhere if I have to be on time. That afternoon, two B65s didn’t show which meant I had to walk about a mile during the hottest part of the day to get to my haircut appointment. I got a great ‘do though, and I was looking pretty fresh for Chris and Julia’s cocktail happy hour that evening. Such a perfect idea: have people over for an hour, then kick them out. It ensures punctuality and attendance and means that it’s easy for all three of us to go. Charlotte ate about six deviled eggs and then found a spot to read until it was time to go. 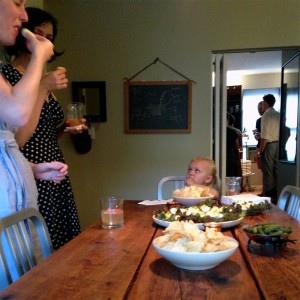 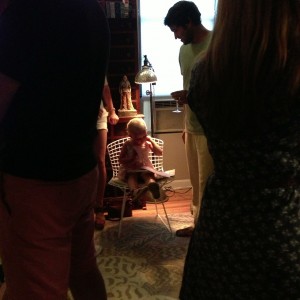 After another grueling morning run, Charlotte and I swung by a birthday party at the Underhill playground for one of her colleagues. Maggie, feeling better, stole over to the studio to get some work done while we partied. Parents at the Underhill playground. Not pictured: miniature cupcakes.

Later, we met up for lunch at The Saint Catherine, a new coffee shop slash bar slash American (Traditional) restaurant on Washington. It’s kid-friendly but not kid-centric, a new signal of our rapidly changing neighborhood.

Charlotte and I ate lox, Maggie yogurt, while carefully selected music from the late ’00s played. The atmosphere was a strange meeting of two times in my life. I could listen to Alligator-era National and look out the window at the liquor store on a scrubby stretch of Washington that hasn’t changed since 2006 and imagine that life was the same amusement park that it was when I was 26. But, there too, was my nearly 4-year-old daughter looking out the same window at the same neighborhood while both of us picked at $12 brunches in a restaurant that didn’t exist six months ago. Life like two ends of a folded blanket. 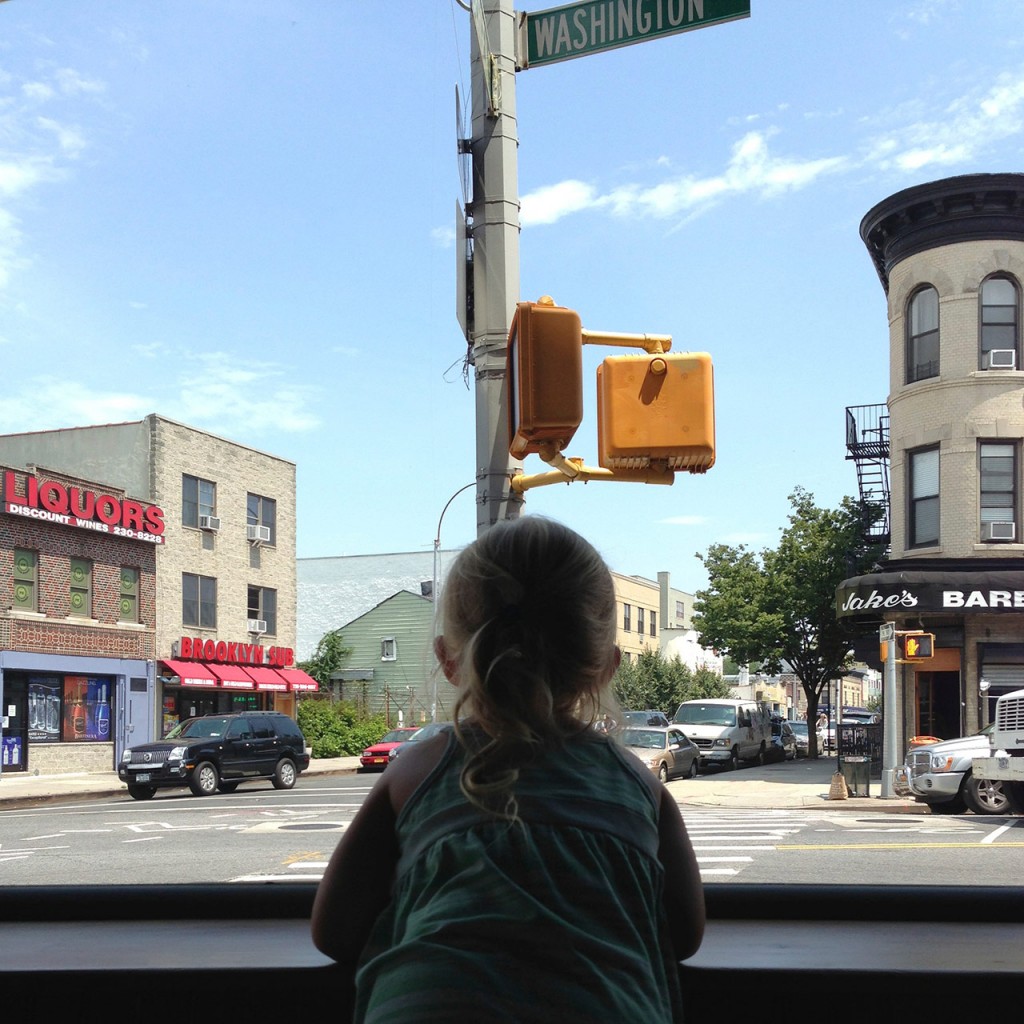 We shared a grapefruit juice—I’m too old for brunch drinks.

I capped off the long weekend with one of the most satisfying runs of the year. I had tired legs and didn’t intend to go far. Once I got out there, however, my legs loosened and breathing came easy. I didn’t catch the light at Bedford and Eastern Parkway, so I took a right turn and started running with the green lights, through the suburban, quiet streets and grassy front lawns of Prospect Lefferts Gardens, through a park at the far east end of Eastern Parkway with cricket fields, and eventually out of Crown Heights entirely.

It was a bit under 6½ miles total by the time I got back, which gave me the confidence to actually enter my first race, a 10-miler in Prospect Park in mid-August. The race, at least in name, commemorates The Battle of Brooklyn in 1776. Prospect Park was one of the sites of George Washington’s panicked retreat to Manhattan at the start of the Revolutionary War. 237 years later, I’ll remember it by running around the park thrice. I bet George didn’t see that coming.