A Sense of Urgency

Back in Iowa, our friend Rick calls those short, dark days at the end of January “the bottom of winter,” a phrase I’ve always found to be delightfully evocative.

It stands to reason, then, that these days right here must be the absolute top of summer. The days are so bright and full of color that it’s hard to imagine it was ever—or ever will be—any different.

1 One surprising and kind of disappointing thing about writing this blog is that the posts are a better reflection of my early- and mid-week mood than they are of my weekend mood. Shoulda called it 13 Tuesdays, I guess. The events of the weekend are always easy enough to recall, but the moods are so fleeting. Little summer triumphs, like running an extra mile on an unseaonably cool morning, or having a brief but uninterrupted conversation with a friend… these feelings must be recorded immediately before they fade. Often, Monday is too late. Preserve it fast before it spoils.

This will be brief because, frankly, there are a hundred things I’d rather be doing.1 There’s peach pie to be made, and IPA to be kegged and experimented upon,2 and I haven’t picked Charlotte’s puzzles off the floor yet (but I did do the dishes). I’d really like to take a few minutes to mentally prepare for some longer runs later this week and maybe get to bed 30 minutes earlier because the cumulative effect of all this running is that I’m suddenly very tired on top of being ravenously hungry. On the other hand, there’s reading to do, now that I’ve rediscovered actual books.3 I finished “Tenth of December” on the train a few hours ago and it was just so eye-rubbingly good that I am putting all other reading on hold to pursue this line of inquiry. I’m already thinking about the quantity and type of peaches I’ll get at Saturday’s greenmarket. I’m thinking about fall beers, I want to do at least one with a long, cold lagering period: an Oktoberfest? Another biere de garde? Maggie’s birthday is soon; Charlotte’s, too. We need to go somewhere this summer but I planned really poorly. Gotta think about that.

And I’m really hoping I can sneak a peach later tonight before they totally bruise.

So, without further ado, Weekend #10:

Charlotte and I spent so much money at the greenmarket on Saturday. The two of us collected a rainbow of fruits and veggies—Charlotte got to pick out the tomatoes and some of them even made it back to the apartment.

The sprinkles, nothing more than an annoyance in the morning, gave way to a brilliant and partly cloudy afternoon. We walked over to Nick and Aaron’s for one last party before they move to LA. Charlotte, when asked, didn’t recall being at their housewarming party awhile back. Even though it was like three years ago and she had only just started walking, it seemed worth asking about even if it was a longshot. Some kind of bookend situation.

Long before this weekend we had circled Sunday as a day to get outside the city, since we had no obligations or work to keep us. After July’s heat wave, the weather has been so unseasonably perfect and so we opted for the shortest possible getaway by train: another trip out to Brighton Beach. The ocean was cold and clear, the beach practically a bibliotheque it was so busy and quiet. Everyone was savoring the pleasant warmth, even the dudes yelling about Jell-O shots and nutcrackers (?) didn’t start up until mid-afternoon.

We came home and ate tomatoes and cucumbers and onions with buns and condiments and other summery stuff. Charlotte went to bed with the sun like she’s been doing all summer and we started another week.

Nick and Aaron’s party probably should have felt portentous (and may yet), what with old friends making a big decisions to move far, far away. But for now, it just felt like a warm August weekend with no sign of fall on the horizon. I’m living in the moment—these are ripe days. 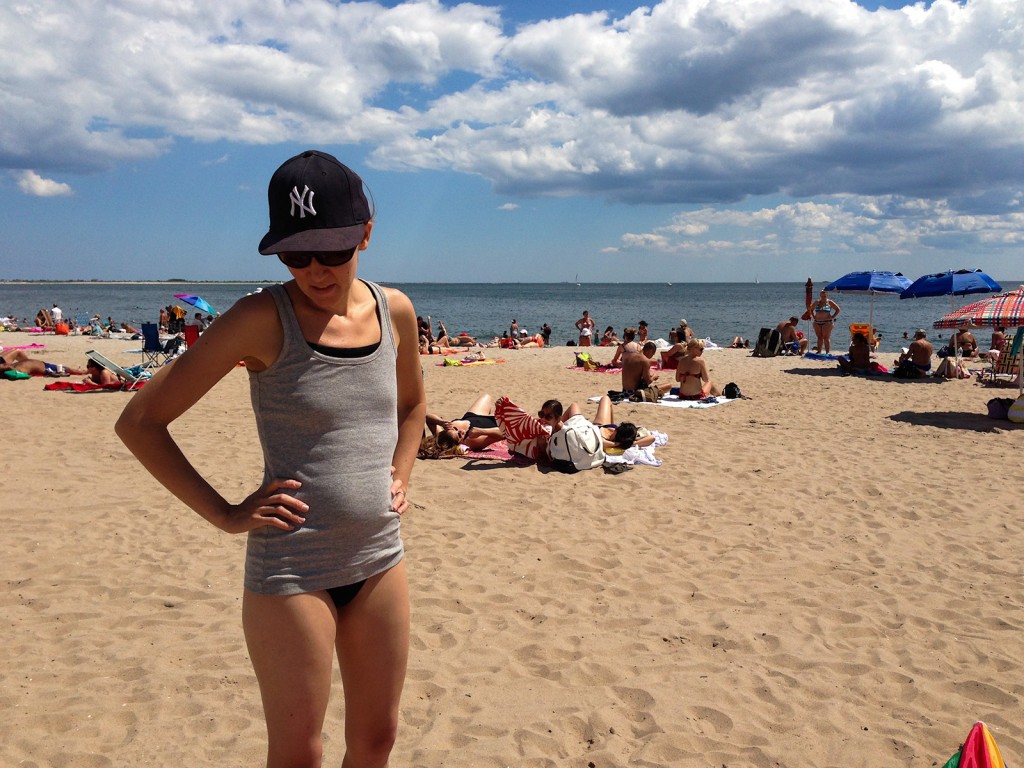