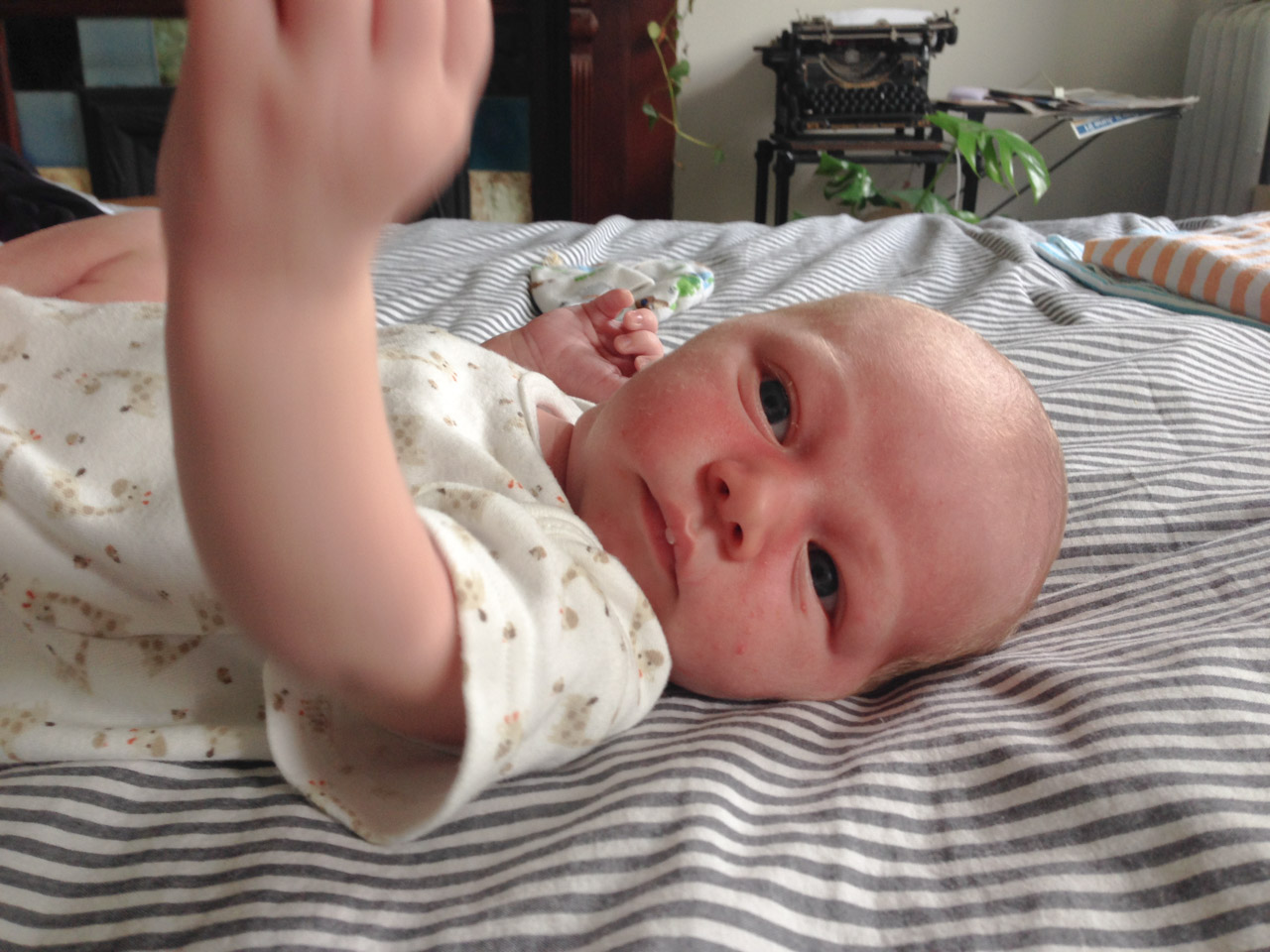 Soon after Wilder arrived, I got a congrats text from Scott. He mentioned that he, Heather, and young Martin, whom we had never met, would be in town in 10 days or so.

“Cool!” I thought. A rare opportunity to reconnect with Iowa expats. Since 10 days is about 50 newborn years, I put down the phone and promptly forgot all about it. So, it was a happy surprise on Friday night when we realized that we were going to see our old friends the next day.

We had, as Maggie calls it, a “wakeful” Friday night. Saturday started a little scattered and laggy. The simplicity of our get-together—a picnic in the park—felt even more important. I can’t speak for Maggie, but I was excited to get out and Do Something with friends. On some level, I was motivated to prove to myself that we could still do everything we did a mere month ago.

After the Hallen-Iversons arrived, we made them do what we make all our visitors do: march. We dropped off laundry, collected picnic stuff from three different stores, and then walked the mile to the park under a hot sun (though surely nothing by Mississippi standards). We could have shortened the trip by claiming any number of spots closer to the park entrance but I felt—and sensed Maggie’s unspoken agreement—that Wilder’s first Prospect Park picnic should be beneath the American Elm. Of course we dragged everyone else along in service of this poetic moment.

It was such a perfect afternoon. Cool in the shade, hot in the sun, but not so hot that it prevented dashing out into the sunny meadow with a soccer ball or stroller to quiet a fussy kid. We caught up, we relaxed, we met friends of friends, we snuck park beers. It was totally typical. We stayed the whole day; we used the park like we did when we were 26.

At home later that evening, Maggie was in tears. She was a wreck, laid low by the combined effect of too little sleep and the demands placed on her body. She couldn’t speak without tears pouring out. That she felt so vulnerable after such a pleasant afternoon made it even worse. I was caught off guard, like I was on a roller coaster whose biggest drop is in the middle.

This is the sticker Charlotte gave me this afternoon when I was crying, overwhelmed, tired, and hungry. Because she is an incredibly thoughtful and sensitive kid. I am lucky beyond words. #awesomeday #solittlesleep #wemakegreatkids

Fatigue was setting in and there was no immediate relief. Saturday night was as wakeful as the night before. Every hour, one of us would click the light on and we’d grope around without our glasses, bumping into the bed frame, gathering the little guy, unwrapping, wiping, wrapping, nursing, burping, all while he let us have it.

Sunday morning arrived, hot and leaden. I was nervous about Maggie’s fragile state, but I felt the best thing we could do was give them space. So Charlotte and I tiptoed out of the apartment and left Maggie and Wilder asleep on the bed. Our destination was the air conditioned bookstore. Charlotte parked in the kids section while I imagined the mind of the person who put Judy Blume and Karl Ove Knausgård on the same shelf. This course of action improved things a huge, tiny bit.

The rest of the weekend faded from memory almost immediately, like many of them lately. I have photos on my phone from that afternoon of Wilder on our bed, his inky blue eyes looking alert while trying to focus on his hand. I don’t remember taking them but their existence feels like a sign that we had reached some kind of precarious equilibrium. We were exhausted, but we still thought the little guy was cute enough to take a picture.