The main event this weekend was Charlotte’s preschool graduation. It was sweaty, it was cute, it was poignant. I wasn’t going to write about it. In fact, I wrote a totally different post for this week about our Saturday trip to Governor’s Island and how much it felt like living in a giant amusement park but my editor sent it back. She wanted words about Charlotte’s “stepping up” ceremony.

It fell on deaf ears. Her disappointment with my original effort gnawed at me all day. So, here I sit at our kitchen table on Thursday night, in my swimming trunks (it’s so hot), starting over. She was right, she always is. Sometimes you just have to start over, even if you don’t have it figured out. I didn’t expect to figure it out until the first day of kindergarten in (*gulp*) two-and-a-half months. I’m better with beginnings than I am with endings. 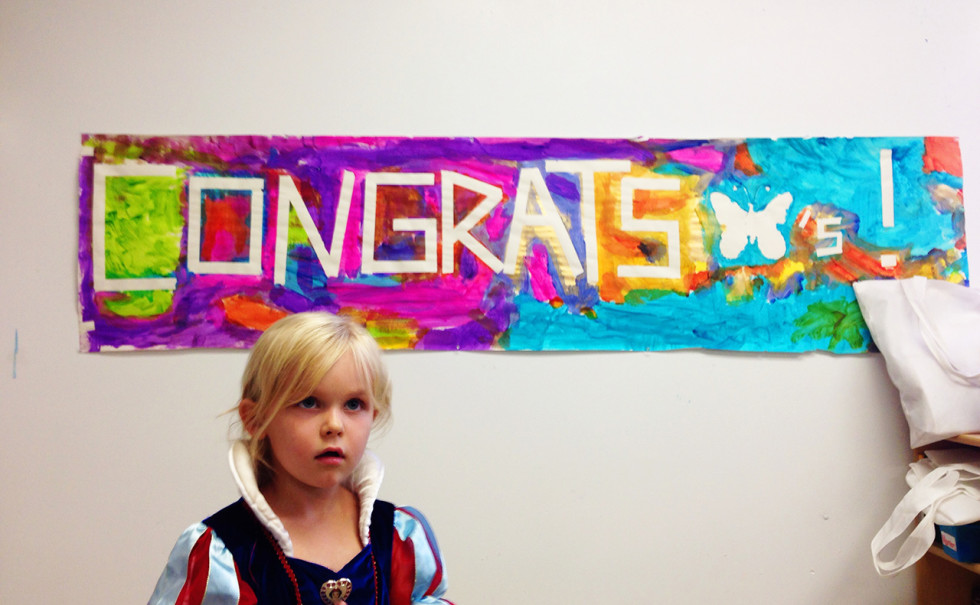 This particular ending began Thursday morning. Inside the ol’ educational cinder block, it was hot and humid, in the way that all schools are required to be in June. The parents waited in the hallway outside the classroom while the kids had a closed door meeting.

We made small talk about what everyone was “doing next year,” which are code words for how much do you make, where do you live, and is your kid smart? It is one of the most loaded questions you can ask in NYC and a frighteningly efficient weapon for the nosy. Most were going to different schools, a split between choice and circumstance. One parent laughed that she didn’t consider other schools because it was too much work to switch. How is the path of least resistance $19,000 per year tuition for a four-year-old? (Full disclosure, we paid about half that for Charlotte’s preschool this year. It makes me uncomfortable to say it, but the school was great and paying that tuition was our best option last year. So, actually, I kind of understand. It’s a topic for another post. But public school next year and forever, insha’Allah.)

The kids left the room to get ready and the teachers invited us in. We all sat on miniature chairs, dudes trying not to muss their biz-cas look while the ladies awkwardly clutched their skirts, unused to this kind of low altitude sitting. Then, the kids re-entered, to “Pomp and Circumstance,” of course. They had made and decorated their own caps out of construction paper. Many of the kids were dressed up—the call to dress up spread like wildfire the week before. Nearly every parent had his or her phone out, pointed straight at their kid and their kid only, recording the whole thing. I did, too. Did anyone actually pay attention to what was happening? Did anyone just enjoy the moment? What were we so scared of missing? Finley, could you scoot to the side just a little bit?

Then, the reading of names. Every kid got a diploma, a bag full of fun stuff, and loud applause. After the ceremony, and at the risk of reinforcing gender stereotypes, the boys blew up their balloons and absolutely whaled on each other while the girls gave their teachers hugs and posed for pictures. 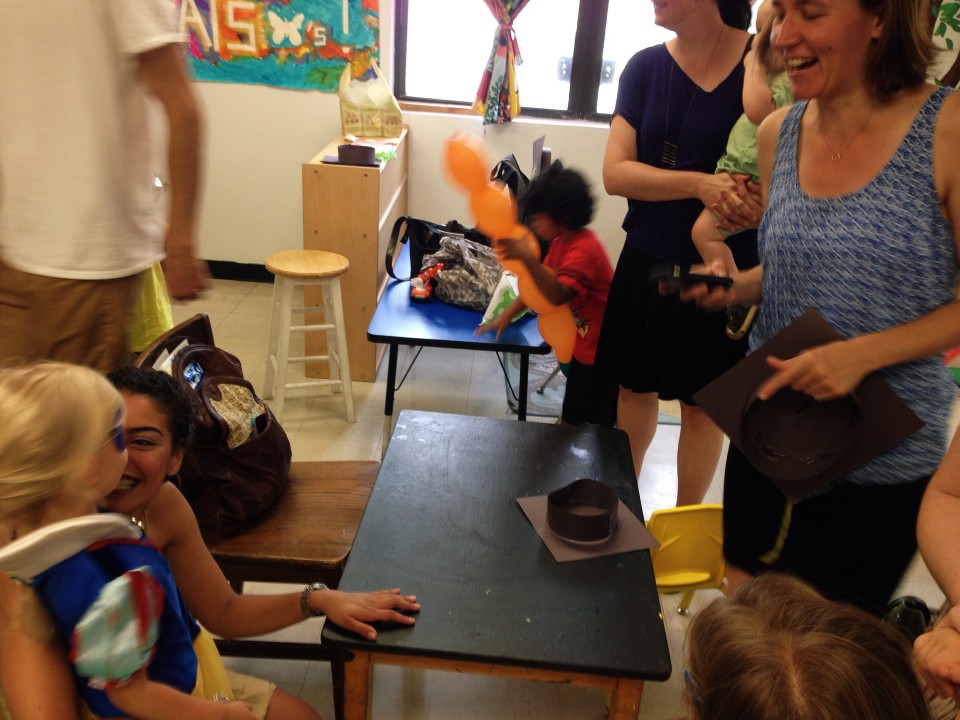 We all went up to the school’s rooftop playground for the customary 11 AM pizza party. Inexplicably, there were no cheese pizzas in sight but plenty of olive pizzas. We huddled under the little bits of shade offered by the playground equipment and enjoyed a taste of the Mediterranean, Brooklyn-style. 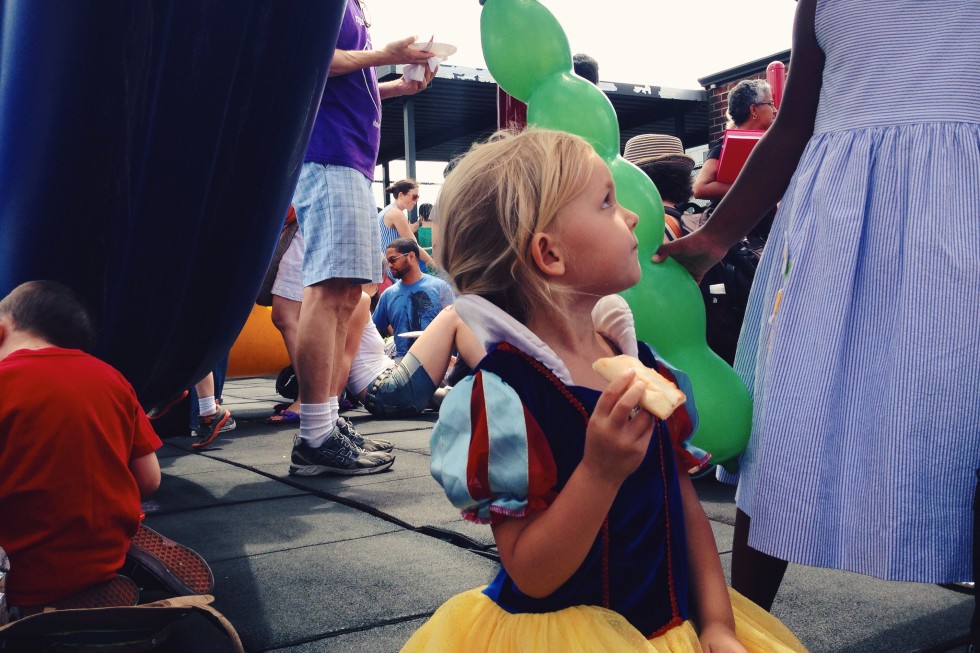 After pizza, Charlotte didn’t feel like playing on a blazing rooftop with her friends, so we left. We went down the stairs and out the front door and just like that preschool was over. I don’t think Charlotte got the finality of the moment. Not that I was expecting her to, or even that I think she should have appreciated it. Because, after all, who was the pomp and circumstance for anyway? Certainly not Charlotte, who has little experience with endings and would happily go to school every week forever if she could. This was all for us. This was about marking time and trying to make sense of it. Charlotte didn’t need that but we did. Right? 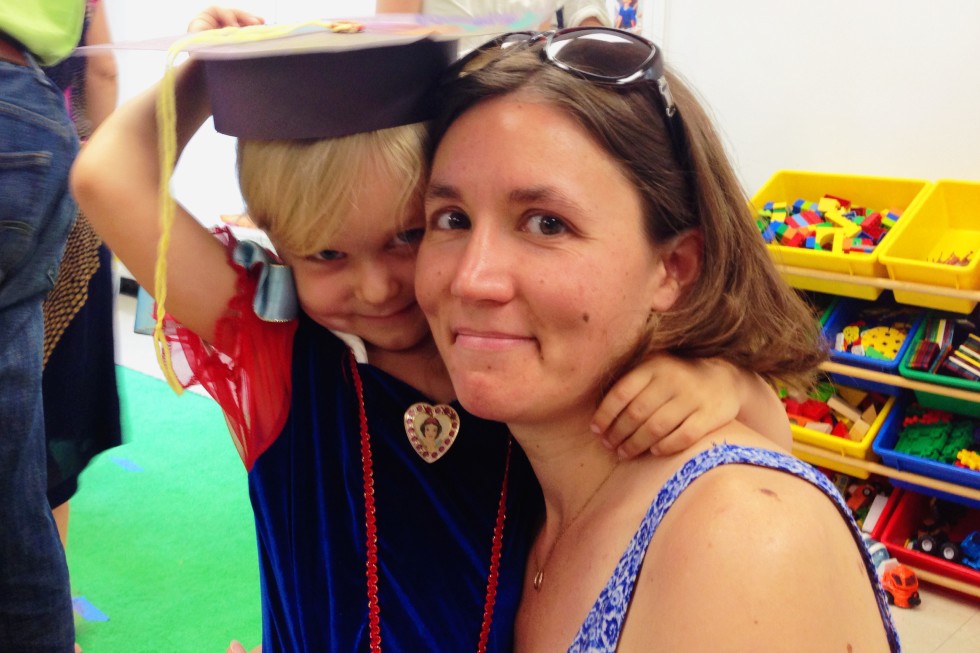 Finally, in the week since, Charlotte has grabbed my phone more than usual to watch the video I took of her stepping up to receive her diploma. In the video, one of her teachers calls her name and she pops up in her Snow White dress. She gingerly makes her way around the other kids seated on the rug. She struggles to keep her paper cap on top of her head while holding her graduation loot. She returns to her seat, barely keeping it all together. Then her cap falls off and the video ends.

What is her motivation to re-watch this moment, I wonder? Is she living it again in her mind? Is it just fun to see herself on screen? Is this kind of replay even important? If I had more time, maybe I could figure it out.