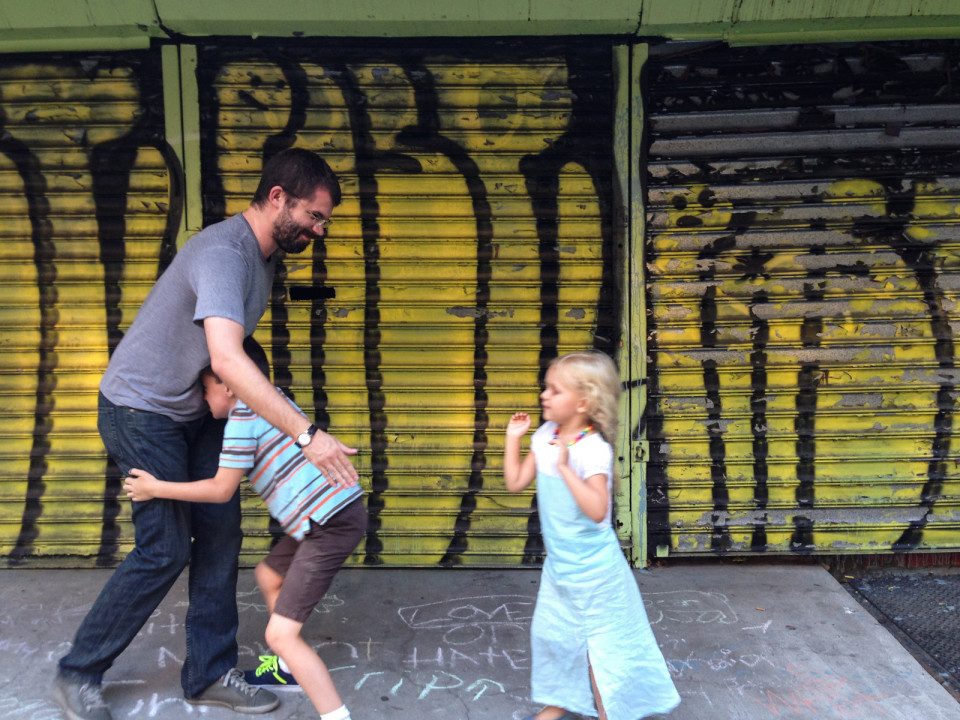 Elsa considers adding the headbutt to her arsenal of ice powers. (July 12, 2014)

It occurs to me that I’ve done a lousy job recording the numerous changes in Charlotte’s life, which was one of my only goals in starting the blog. As a result, we have a bit of distortion, if you expect 13 Weekends to be a representational picture of the summer. If x percent of my posts should represent x percentage of the summer, well… then then the fact that I’ve barely mentioned Frozen is basically dividing by zero. Because Frozen has represented 110% of our summer.

There are more interesting things than the arithmetic of Frozen, fortunately. We’ve had a near-constant string of visitors throughout the summer, which has allowed Charlotte to test out some new material on a variety of audiences. 8-month-old Tucker’s departure was followed this week by 7-year-old Roan’s arrival. In reaction, Charlotte switched from wise, gentle, older caretaker to competitive younger bro, a fascinating about-face. Some of her more endearing and, frankly, adult-like personality traits to come to the surface this weekend. Here are four brief transcripts to illustrate.

I. Correcting the Record

We’re eating pizza and the conversation is about spiders. Roan was describing a really large spider he saw once.

Post-pizza, the topic is the scary rhinoceros scene in James and the Giant Peach, which we had all just watched.

III. Interruption Due to Burning Curiosity

The topic was what contact lenses are and how they work.

ROAN: Are they rubber or plastic? How do you see through them?
MAGGIE: Well, they have a prescription. Everyone’s contacts are different so that they—
CHARLOTTE: WHY ARE WHALES SO BIG?

In the bathtub Tuesday night, the topic was a recurring one: a friend has been using the neologism “hienus,” which has Charlotte baffled.

CHARLOTTE: She said if you have to pee then your bottom is called a “hienus.”
(Unintelligible crosstalk with Maggie.)
CHARLOTTE: A BOTTOM IS A BOTTOM.

Love this kid. In summers past, her advancements, while numerous, at least felt predictable and constrained to a known universe of possibilities. She walked. She got taller. She learned the difference between “I” and “you.” All to be expected. This year, though, we’re outside of that space. Apart from a few obvious milestones like learning how to read, I no longer have a good sense for what’s possible.

A winding mountain pass isn’t quite the right metaphor—that conjures an image that is too precipitous, too full of danger. But I feel elements of that. I can feel we’re headed up the mountain, but it’s harder to know what’s around the bend. It’s can be bumpy, but it’s fun. Maybe I should have brought a pillow for my hienus.

3 Responses to Around the Bend